Shaka, when the walls fell.

This is really cool and useful! I’ll be using this! Thank you

On this note: do we have a fairly good understanding of why none of these alternative systems took off?

This is very interesting, but also worth mentioning that this is a paper from 1978. I didn’t check the date at first and got very excited when I read

A new class of computing systems uses the functional programming style both in its programming language and in its state transition rules.

It’s this weird US thing

This is a much less extreme example, but I still feel it illustrates the point: 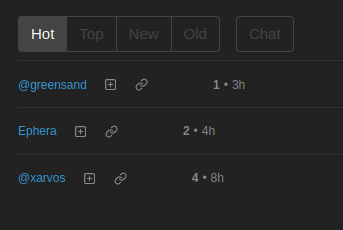 I’d like to find an example with higher numbers in a 24h window but that’s hard to come by at this time. 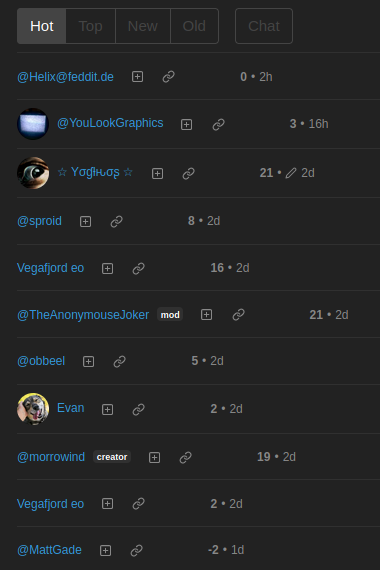 It doesn't feel like the algorithm is weighted properly. I usually see the more recent comments near the top even if they have no or very few upvotes (or sometimes even in the negative), with the highly upvoted comments somewhere lower down. I would expect Hot to feel more like Top but with extra weight given to the rate at which a comment is being upvoted, giving more visibility to new discussions in older threads. I think comments with a high number of upvotes deserve a little more weight to avoid a 12h old comment with 60 upvotes being outcompeted by a 12m old comment with one or two upvotes. I could accept a 1h old comment with 10 upvotes being placed above a 10h old comment with 30+-10 upvotes. I would also like to be able to change the default for my account.
fedilink
2
message-square

fedilink
RavntoLinux@lemmy.ml•Should You Use A Rolling Or Point Release Distro?
link
fedilink
1•10M

The most confusing part of flakes is that it isn’t the default, but sort of defacto is because so many use it (myself included). At this point I feel it should be the default. The installation process doesn’t use the flakes feature so it has to be worked around and it isn’t straight forward.

Nix(OS) has a case of expert user base that aren’t motivated enough to make it easier for those unfamiliar with the concepts to get going.

Nix makes more sense if you understand referential transparency and functional programming. Even then, how a lot of nix expressions are written is quite confusing with all the self-recursive overrides, functions that are somehow also sets etc.

The best documentation and tutorials are probably somewhere other than in the official ones (though official documentation is not bad). Nix Pills and the wiki, especially.

Totally understandable. One day we may see a graphical installer and configuration manager and that is the day I can start recommending others to try it

Learning Nix and NixOS was the best investment I’ve ever made for my computer use since switching to Linux a decade ago or so.

The barrier of entry is so high I don’t blame anyone for not making the leap but I wish more people could enjoy the benefits. All other distros bar GuixOS feel utterly archaic and clumsily designed by comparison.

Why would they crack down specifically when it’s open sourced? I could see why they would do it before it goes open source though. Once it’s out there it’ll be hard to prevent the continuation of the project

The default configuration generated by nixos-generate-config is a good starting point. From there you can probably find more things to disable or trim down. environment.systemPackages and environment.defaultPackages for example are lists you can make very short.

I was alluding to the fact that it’s not a copyleft license. AGPL is a suitable OS license.

Matrix or IRC are popular. Can also be XMPP or any other open protocol. Bridge to proprietary networks if necessary but a FOSS project should never rely on Discord. https://drewdevault.com/2021/12/28/Dont-use-Discord-for-FOSS.html

You can configure NixOS to have as little or as much as you want by setting the right options. Arch allows customising to a similar level but that’s less… configuring and more installing things and tweaking stuff here and there.

To find videos across several instances there is this (as official as it gets) search engine: https://sepiasearch.org/

Out of curiosity and if you don’t mind me asking, what collapse did you live through?

If you feel comfortable learning a functional programming language, NixOS is unbeatable when it comes to stability and (usually) up to date software. If you already know (or prefer) Lisp/Guile, Guix is just as good, as long as you don’t depend on proprietary software.

I think it would be good to decentralise communities so that the same community can be hosted on several servers. It sort of sucks to have a community die because a server goes away.

link
fedilink
RavntoLinux@lemmy.ml•[Discussion] Laptop and tablet screens with rounded corners and notches are coming, what does this mean for running Linux on them?
link
fedilink
3•1Y

Maybe this is also an opportunity for DEs to rethink the rectangular UX? Would be cool to have a Unity8-like sidebar that will fit along any edge, irregular or straight alike. Also radial menus, we’re overdue for some native desktop radial menus!

external-link
cross-posted from: https://lemmy.ml/post/67540 > This week, we see lots of design changes to many systems. We hear about how this what is going on with the crafting and loot systems, as well as planned improvements in the combat fields. > > \- AngelOnFira, TWiV Editor
fedilink
4
external-link

external-link
cross-posted from: https://lemmy.ml/post/65873 > >This week, we have some nice visuals to check out. We also see some updates to the minimap. > > > > \- AngelOnFira, TWiV Editor
fedilink
4
external-link

external-link
cross-posted from: https://lemmy.ml/post/63444 > > This week, we take a deep dive into the recent physics overhaul with @lboklin. We also see improvements in the moderations, translation, and skill systems. > > > > \- AngelOnFira, TWiV Editor
fedilink
6
external-link

external-link
cross-posted from: https://lemmy.ml/post/62793 > > This week, we see an amazing video of the new glider changes. Work is being done with audio, UX/UI, economics, maps, and lots more. > > > > - AngelOnFira, TWiV Editor
fedilink
8
external-link

image
We're holding a party to celebrate the release of pre-alpha version 0.9. Since the game is continuously kept up to date with current master, the update itself won't bring anything new that isn't already available right now. However, lots of new features and fixes have been added since 0.8. Check out the weekly updates on the website for more info on what's been happening lately! https://veloren.net Join us in-game and/or on Matrix: https://matrix.to/#/#veloren:matrix.org If you would rather use Discord you can find the link on the website.
fedilink
12
image

A community for cellists and cello fans

A community for cellists and cello fans